Ever heard of James Starley? Maybe not. But we bet you’ve heard of the penny-farthing, right? This famously crazy-looking bicycle was targeted at a sporty, affluent audience and featured its wildly disproportionate wheel sizes on account of the lack of anything other than direct drive in use on bikes at the time – the larger wheel enabled higher speeds until gearing was invented.

While the concept of the bicycle itself was of French origin (Google ‘bone shaker’ to find out more), it was Mr Starley who both improved upon and popularised the device, securing Coventry’s place as the heart of the UK bicycle industry when he started making his own bicycles in 1868. 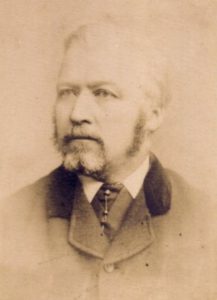 Born 38 years previously, Starley ran away from home at a young age and was taken in by a sewing machine manufacturer after being spotted making innovative repairs and upgrades to sewing equipment while employed an under-gardener in London. In 1861 he actually started his own Coventry Sewing Machine Company before clapping eyes on the bone shaker and deciding to take the company down that path.

Renowned as the ‘father of the bicycle industry’ he made popular the penny farthing (often called simply the ‘bicycle’ or ‘ordinary’) as, in spite of its obvious safety disadvantage, it was quicker than contemporaries and therefore considered more desirable.

Another of the machines Starley worked on was called the sociable, which he noticed was difficult to ride in tandem. The historian Edward Lyte wrote: “Each rider of the sociable drove his own big wheel independently, so the course of the machine along the road was rather variable. One day Starley cried ‘I have it!’ and dismounted. He sat down to a cup of tea and forthwith invented the differential gear that is now incorporated in the back axle of every car. It was a Saturday. At 6am on the Monday the prototype was being made and at 8am Starley was stepping on to the London train to register patent No. 3388,1877”.

Starley’s nephew, John, worked with him and eventually went on to create what was known as the ‘safety bicycle’ – effectively the modern bike we all know and love – in addition to what would eventually become the Rover car company.